THE GREAT-GRANDCHILDREN OF BENJAMIN & EVE WIAN

The grandchildren of Daniel and Mary JaneWion of Centre County, Pennsylvania

5daa The children of Frank and Annie Wion of Centre County, Pennsylvani

Willis Wion was graduated from Bellefonte High School. After two years as a school teacher he began a career in the automobile business which continued throughout his life. He opened a garage in 1913, selling Franklin & Dodge automobiles. From 1919 to 1939 he was the agent for Nash cars. During the Earle Administration in Pennsylvania he was in charge of all motorized equipment for the State Department of Highways in Centre County. He was a dedicated member of the Independent Order of Odd Fellows, holding all the orders of that lodge. As young men both he and his brother played cornet in the Zion Band. Willis died on October 25th, 1957; his wife died on June 7, 1960. Their children are described further in the sixth generation.

A descendant of generations of farmers he was the first person in his family to be able to go to college, graduating from Pennsylvania State College in 1908 with a B.Sc.E.E. He was 5' 9", blue eyed, and fair of hair and complexion. His first wife was Pearl Oneida Hoy (May 13, 1887 - February 10, 1948). Their first child, Kathryn, was born in 1911. As a signalling engineer he worked for the Pennsylvania Railroad until 1914 - the latter part as assistant supervisor of signals in Manhattan, New York. In 1914 he went to Melbourne, Australia, to assist in the electrification of the railroad system. His second daughter, Jocelyn, was born there the following year. The two children grew up in Melbourne until their parents were divorced, when they returned to America with their mother.

George Wion remarried on April 17, 1930, in Brighton, Australia. His second wife was Marianne 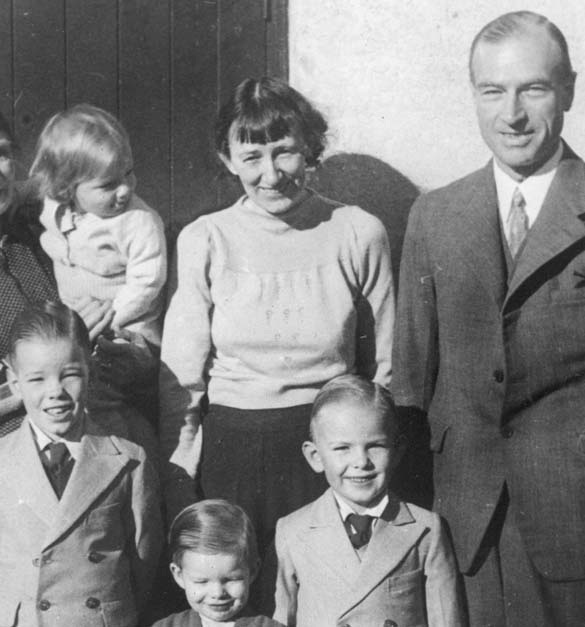 Sophie Turner who was born in Horsham on January 20, 1898, to Norman and Lydia Bretag Turner. After their marriage they sailed for America, settling in Chicago where George Wion became the sales engineer for General Railway Signal Company of Rochester, New York. Their first son, Francis, was born here in 1931. They moved to Rochester, New York, then back to Melbourne, Australia in 1934. Their second son, David, was born there that year. In July 1935 George Wion went to Rio de Janeiro, Brazil, to supervise the electrification of the Central Brazil Railway System, which job lasted until 1938. In 1937 his third son, John, was born there. In 1938 the family returned to the United States where Richard was born in Rochester, New York. They then travelled, via London, to Australia, where they finally settled in Melbourne. During the war he worked for the Ministry of Munitions as Project Manager in Melbourne and Darwin. He died in Melbourne on April 11, 1949, in his sixty third year. He was the inventor of several signalling devices. Marianne Wion died in Melbourne on October 6, 1989.The children of George Wion are described further in the sixth generation.

return to the fourth generation